At first, it may seem startling to see the small but dense selection of works by the American artist Bruce Nauman (b. 1941) alongside those by the Belgian Philippe Vandenberg (1952-2009). The artists never met one another and they could not be more different in their choice of artistic media. Nauman’s oeuvre is extremely wide-ranging and includes sculptures, installations, performances, drawings, prints, videos, neon and soundscapes. In fact, the only thing that he has never done over the years is paint. And yet painting is what Philippe Vandenberg loved the most, although he also made a huge and impressive range of drawings, most of which can be found in his sketchbooks. What is it, then, that links these apparently divergent artists and their respective oeuvres?

In the first instance, Nauman and Vandenberg share a common attitude towards their artistic practices. This involves a form of elaborating things, a process of exploration and investigation as an attempt to understand how we relate to the world and to each other. Neither artist is interested in promoting certainties or in creating a ‘nice’, cosy art. Their works are direct, raw, uncouth and finished just to the point where they enter the space as a kind of prelude or genesis to something. And this is when the real questions begin. There is rarely a simple form or a straightforward answer, and therefore in both Nauman’s and Vandenberg’s oeuvres there are countless repetitions, inflections and variations on the same theme. These are indicative of a certain obsessiveness that occasionally borders on mania. We perceive the strain that both artists are under and their single-mindedness. They are men who take things seriously – existentially seriously. There is a strong intensity in Nauman’s and Vandenberg’s works, one that is both gripping and distressing, unsettling and haunting.

But what, then, propels these two artists? What motivates them? What is the secret that drives their art? I venture to claim that Nauman’s and Vandenberg’s work, no matter how different it may look at first sight, originates from the same source: frustration. It is not a matter of being upset about life in general, i.e. of suffering Weltschmerz [a feeling of melancholy and world-weariness], but a case of despairing about the dark side of people, about hatred and violence, coldness and vilification, and about the impossibility of communication between people and of engaging them. In an interview with Bernard Dewulf in 2008, Philippe Vandenberg explained: ‘Despair has many guises. Despair guides me to my studio, where another despair is waiting for me. That’s how it is.’ Bruce Nauman said something similar in a conversation with Joan Simon in 1988: ‘Anger and frustration are two very strong feelings of motivation for me. They get me into the studio, get me to do the work. […] My work comes out of being frustrated about the human condition. And about how people refuse to understand other people. And about how people can be cruel to each other.’ (i)

Human Companionship, Human Drain is the title of one of Nauman’s lithographs, dating from 1981. Human coexistence, it seems, is bound ‘to go down the drain’, like water trickling away through the sewer. ‘Help Me Hurt Me’, cries a male head that is spinning around in a large video installation by Nauman, giving rise to a profound tension between pain and salvation in this interpersonal relationship. In the colourful, three-part lithograph Untitled (Fingers and Holes), 1994, the apparently innocent touch of a handshake seems to turn into an aggressive sexual energy. Who is the perpetrator here, and who is the victim?

Vandenberg’s works are like an echo, born from a similar aggressiveness, erotic vigour and animalistic instinct. Where does the fun end and the violence begin? ‘Kill them all and dance’ is a categorical order to ignore law and order and all the rules that govern human relationships, and to indulge in an ecstatic delusion, driven by the urge to destroy and murder, and by sadistic pleasures. Philippe Vandenberg found inspiration for countless drawings and paintings on this theme in Ayatollah Khomeini’s fatwa that called for the murder of the writer Salman Rushdie after the publication of his book The Satanic Verses (1988). And in the case of the two impressive watercolour portraits, where the heads seem to be composed of a multitude of eyes (or wounds?) and the unusually long tongues protrude from the mouths, it is disconcertingly ambiguous whether this is the sad result of a brutal attack or the distorted image of a many-eyed, potentially aggressive Cyclops. Lust and pain, violence and horror are all too close to each other. We humans are like those that feature in Vandenberg’s almost monochrome La misère du jour III (1996-99), in which four heads are engaged in a circular dance, the mouths inseparably connected with a sort of barbed wire. Death seems the only way out of this whirl.

What makes Bruce Nauman’s and Philippe Vandenberg’s art so great is that both artists succeed in creating images that capture the abyss within ourselves, our failings and our cruelty. Their images are direct, uncompromising and distressing. They are not moralizing, yet they are moral in a very powerful and responsible manner. ‘It is said that art is about life and death. That may be melodramatic, but it’s also true,’ Nauman said as long ago as 1978. LIVE OR DIE! Nothing more, nothing less. 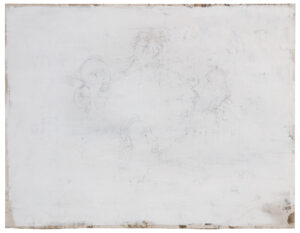